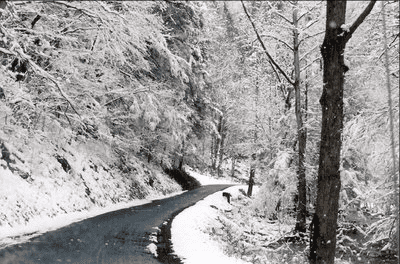 I recall watching the weather before we left that day, and it was calling for a bad snowstorm to hit on Christmas Eve, but in southern WV it was just rain so we thought we’d be okay. So we left Wyoming County about 4 p.m. and started up the road. We were making pretty good time but about halfway home just as we got into the mountains, we drove into snow. It looked just like a wall of snow, one minute we were in rain and the next we were in a blizzard. I turned to Shirley and said “Okay Rudolph, full power” quoting one of her favorite Christmas cartoons. We took it easy on the now bad roads and were making progress on our trip, albeit we were really going slow now.

In the back of both of our minds we were dreading the worst part of the trip which lay ahead of us. You see, there are four big mountains after we get off the interstate, and sure enough the further we went into the mountains, the worse the roads got. On the first mountain, which is usually the least treacherous of all of them, there were several accidents and the road was blocked. There were cars in the ditch and big rigs jack-knifed all over the roads. It looked like Hermie and Rudolph weren’t going to get through. The state troopers were there and were telling people to go back to Elkins and spend the night because the road was going to be closed until they got the worst of the wrecks cleared up. They expected it to be several hours if not overnight. Well, I insisted to Shirley that we wait for a little while and see if things changed, I didn’t want to miss being with my family on Christmas. 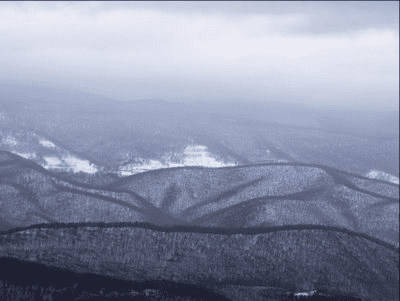 After what seemed like an eternity there was no change in the road conditions and it all looked very bleak. I was beginning to realize that I was probably going to have to spend my first Christmas away from my family on the mountain. I decided to check the weather one last time to see if there were any updates on the situation, so I turned on the radio. The song that was playing was “I’ll be Home for Christmas”, and it was especially poignant to me when it got to the part “I’ll be home for Christmas, if only in my dreams”. The radio offered no news that I wanted to hear and I was beginning to face reality and admitted that we were probably going to have to turn back towards Elkins.

Just when we were discussing where to stay in Elkins, we heard something coming up the mountain. There was a sound of “jing…jing…jing…jing”, it was either sleigh bells or road chains, and I told Shirley it was either Santy Claus or a snowplow. The sound kept getting louder and it was getting closer. A few moments later, we saw the lights of a snowplow and it was scraping the road and throwing down cinders. It cleaned the road around the wrecks just enough for our little car to get through. I went up to assess the newly plowed road and told the State Troopers that I thought I could get through and that I was going to try it. The State police tried to talk me out of it, and tried to warn me of the danger and they told me that if I wrecked I’d probably have to wait until morning to get assistance. I was concerned but I grew up driving in snow so I was confident in my driving, it was just everyone else that I was worried about. So, I got in the car and drove right through those wrecks in the newly plowed road. Behind me, several other cars decided to follow me, but the very next car behind me couldn’t get through the road and got stuck and once again blocked the road. So we were alone and for the next 15 miles or so, we never so much as saw the first vehicle. We were driving on roads that were covered with snow, and we were making our own road as we went.

After crossing the 3rd mountain, the snow immediately stopped and once again we drove into rain again, which was odd because usually the last two mountains are the worst. I’ve never seen a storm like that since, it was like someone shut off the “snow switch”. From there to where we started up the last mountain where home is, we didn’t have snow. It was once again snowing on the mountain at home, but it wasn’t all that bad, probably only 2 or 3 inches on the road. We made it home just as everyone was going to bed…the trip took us nearly nine hours. I remember blowing the car horn as we pulled up the driveway, and hollering out the window, “Ho Ho Ho, Merry Christmas Clark!”, quoting Cousin Eddie from the Christmas Vacation movie. I was just ecstatic!

My parents were shocked that I had made it across the mountains, they had been listening to the police scanner all night, and it was reporting that the mountains were blocked and no traffic was getting through. Mom said that Dad commented to her when they heard the report on the police scanner, “I’ll bet that it is killing Babe not being able to get home.” (Yes, my nickname is Babe!) My one little cousin was the only one of them that hadn’t given up hope, and she wasn’t at all shocked when Shirley and I pulled up the driveway. I remember she kept saying, “I told you all that Matthew would be here for Christmas. I told you he wouldn’t miss it.”

I know the Lord was travelling with us that night, and He answered my prayers in getting us home that snowy Christmas Eve. Ever since then, my favorite Christmas song has been “I’ll be Home for Christmas” because it reminds me of my very own Christmas miracle that occurred along a snowy roadside in the mountains of West Virginia.

Hope you enjoyed Matthew’s snowy Christmas story as much as I did. I wish there would be snow for Christmas here in Brasstown-but it looks like it’ll be more like flip-flops and shorts weather.