Today’s guestpost was written by Carol Isler-who happens to be a dandy soap maker! 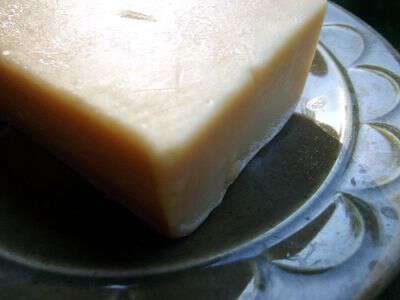 My first interest in soap making came from watching Granny on the Beverly Hillbillies stir the contents of her soap pot out by the cement pond. I imagined my great-grandmother doing the same thing in the yard by the Green River up in the North Carolina mountains.

The first year Dollywood opened up in Pigeon Forge, Tennessee, my husband and I took our young daughter. There was an old granny-looking lady dressed in period costume out in front of a log cabin facade stirring a pot of soap over glowing embers. I stood to the side and watched while she explained what she was doing to a little group of tourists right in front of her. When they left she acknowledged me with a nod and a grin, and I just stood watching for a long time. It was late in the afternoon and hot. She looked a little haggard, and I guessed she didn’t want to waste her breath on only one observer. I asked what the soap was made of because I had missed the beginning of her demonstration.

“Lard and lye.”
“That’s all?”
“That’s all, except for water.”
She reach over in a basket and handed me a small chunk of soap that she had made that morning. It looked and felt like white American cheese. But it didn’t smell like cheese.
“This will eat my hide off, won’t it?”
“Naw. Nothing gentler than lye soap.”
“Really? Nothing?”
“Nothing.”

She went back to scooping the hot soap from the cauldron into wooded soap molds and packing it down. I bought a bar from her for five bucks, a lot of money back then. That began my love affair with homemade lye soap. It made my skin feel good and I wanted to keep that. I was determined to find out how to make lye soap for myself, back before there was this thing called the Internet. 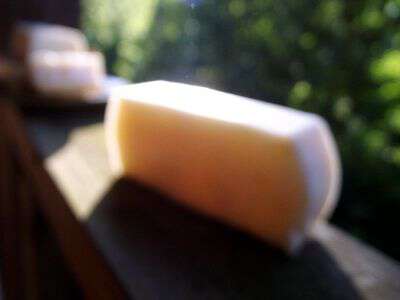 The only book I could find on making your own soap was Ann Bramson’s Soap: Making It Enjoying It. I think I ordered a copy form Pick-A-Book bookstore at the mall. That book told me you could use other fats besides lard. I began saving my beef fat so I could render it for tallow soaps (which makes the best soaps, in my opinion). I looked for olive oil on sale and stocked up when it was. Coconut oil was kind of hard to come by around here back then. I had to drive to town to get it at an organic store way on the east side.

At school, I ran across an old high school chemistry lab book that had a soap making experiment in it and studied up on the chemical reaction of soap making, saponification.

I thought it would be fun to make some for Mother’s Day presents, like the plaster of paris hand prints you do at Bible School. But when I looked through all the chemistry lab books I had for saponification labs, they all said to throw the soap away when finished since it would be too harsh. Most gave the amounts in volume measurements, not mass. That didn’t make sense to me because chemistry is all about stoichiometric relationships. I wanted my students to be able to carry home a chunk of lye soap to use. Back then, I could only find one book on making lye soap at home with lard or tallow and Red Devil Lye. Now there are dozens of books from the experts.

I started with my Chemistry II class. That first batch was plain lye and lard, measured to the nearest tenth of a gram, a perfectly balanced chemical reaction. We added about a half cup of olive oil for extra moisture. When it was stirred enough, the hot, lye-fat mixture resembled custard. One kid said it made him hungry for banana pudding. We poured it up in a Rubbermaid shoe box, wrapped it up in an old quilt to insulate the exothermic reaction, and left it on the lab bench till class met again on Monday. It was hard for me not to peek, but I promised them I wouldn’t. When the first of the students came into the classroom, I had to swat a few hands (you could do that back then) to keep them from peeling back the quilt before everyone got in the class.

I pulled the still-warm box from its covers and lifted the lid. The hardened block of soap had pulled from the sides of the mold like a cake pulls from the side of a pan. It looked and felt like greasy provolone cheese. We flipped it out of the box and cut it into bars with a butcher knife (something else you can’t have in school nowadays). The book said to let it cure for a couple of weeks before using, to dry and harden. We laid the bars out on borrowed, green plastic lunchroom trays and placed them on top of the storage cabinets to dry, out of sight out of mind. I did manage to sneak a bar and kept it under the big lab sink. I quickly learned that if you wash your hands with a good, balanced lye soap you don’t need hand lotion.

Well, that was the beginning of my obsession with lye soap making. Once I tried to make soap the old timey way, by leaching the potassium hydroxide from wood ashes. I saved our fireplace ashes all winter in metal buckets in the garage. A lady who did lye soap demonstrations at Walnut Grove Plantation and Musgrove Mill told me how to do it ,but didn’t tell me the amounts. My experiment was a mess. I was able to make an egg float in the ashes-water, but without the precise lye measurements, I wasn’t sure about how much fat to use. The soft soap was excessively greasy. And within a few months it smelled rancid. 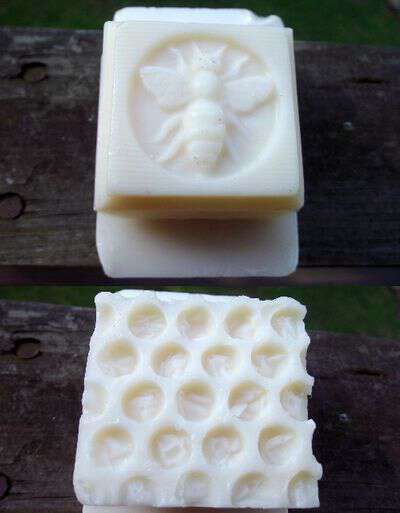 Once I mastered formulating, I entered some of my recipes in a contest at the South Carolina Soap Makers Conference. In 2000, I came home with Best All Round Soap in SC for my multi-layered Oatmeal Apricot Scrub Bar and The Ugliest Soap for my unscented Goat’s Milk Castile, which was baby-poop yellow.

I’ve been making and using soap personally for twenty years. I wish I had this knowledge and skill back when Daddy was still alive. He always had dry, itchy, skin. He rubbed his back against the door frame to scratch the itch. I started calling him Dusty. If I didn’t use handcrafted soap, I would be in the same fix, probably leaving a trail of dust every where I went. Handcrafted soap helps my skin behave like it should.

If you haven’t tried handmade soap, do me a favor and contact me to try some. I love making soap for people. I’m sure you would like it. Make your skin happy. Let me be your savonnier. 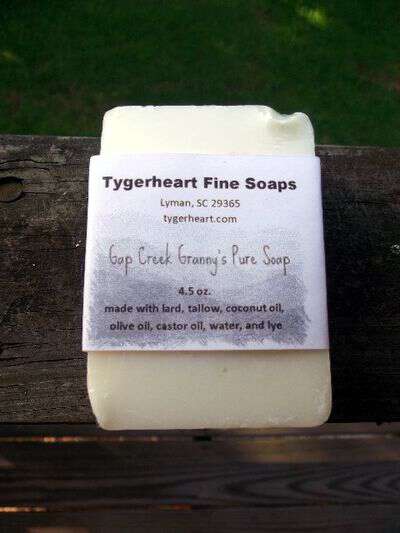 I hope you enjoyed Carol’s guestpost as much as I did. You can check out Carol’s Etsy shop Tygerheart to see her soap selection. I’ve been lucky enough to try Carol’s soap myself-and its fantastic.

Carol generously donated the soap in the photo above for me to giveaway-want a chance to win it? Just leave a comment on this post to be entered in the giveaway. (Giveaway ends Wednesday July 3rd) 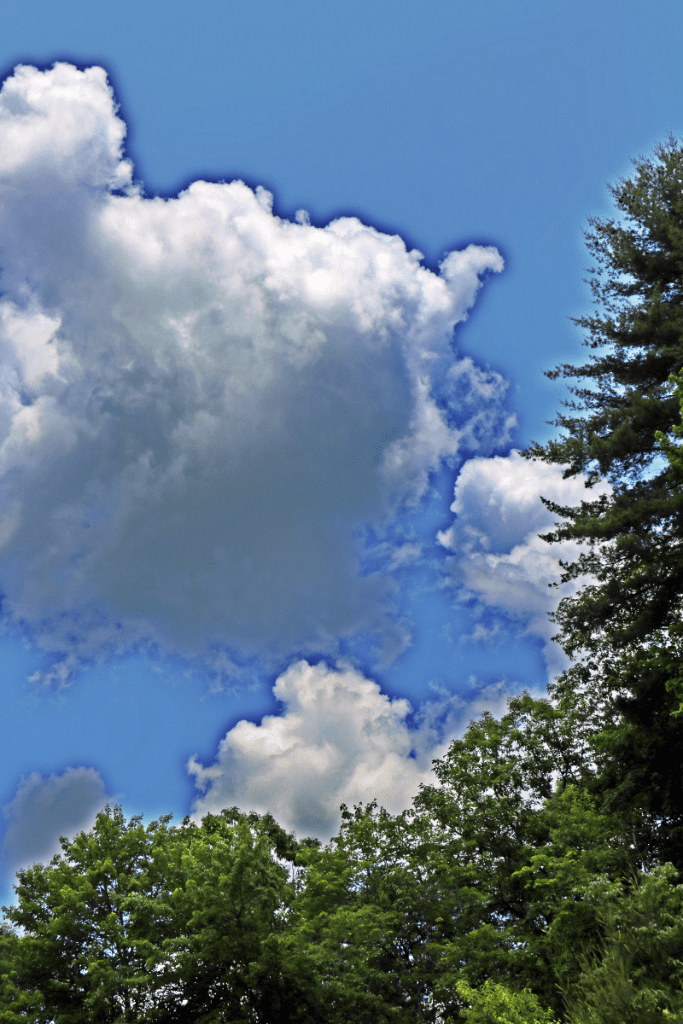 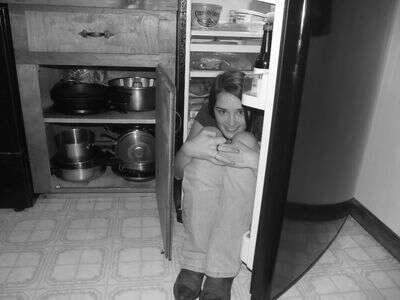 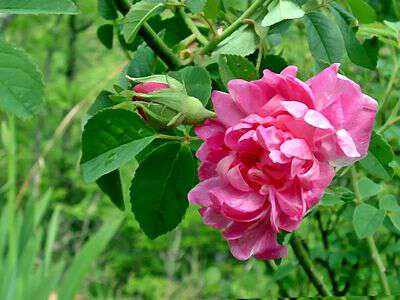