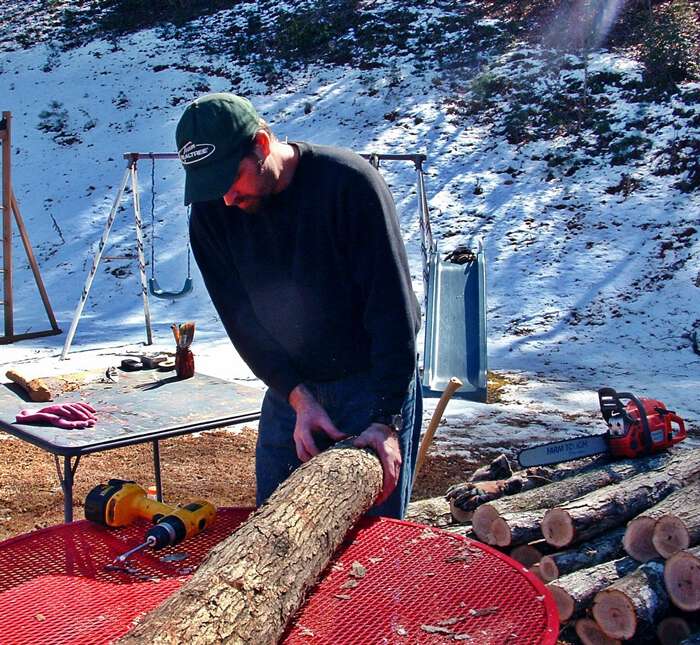 I first read about growing mushrooms in a Carolina Country magazine a few years ago. If I remember accurately, the article was detailing how farmers in NC and GA had a new commercial crop to grow-mushrooms.

As a mushroom lover-I was immediately interested-but it sounded like the cost of getting started would probably be to much for me to afford. A few weeks ago I found out-I was totally wrong.

I attended a Shiitake Mushroom Workshop held by the Cherokee, Clay, and Graham County Extension Offices. Their guest instructor was Christy Bredenkamp who works for the Jackson County Extension Office. Christy was a commercial mushroom grower for years, and today she continues to grow Shiitakes on a smaller scale.

Christy was an excellent teacher-not only very knowledgeable-but she has such an engaging personality I do believe I could have listened to her talk about any subject and enjoyed it.

After the instruction portion of the class, each student got first hand experience with the beginning of mushroom growing-by inoculating their own logs. I left the class knowing how to grow Shiitake mushrooms-and knowing I wouldn’t have to take out a loan to do so-but I better get on the ball if I wanted to start this year cause-when growing Shiitakes there is a window of time during which the logs should be inoculated.

Last Saturday morning with snow still on the ground, the Blind Pig family begin our attempt at growing Shiitake Mushrooms. 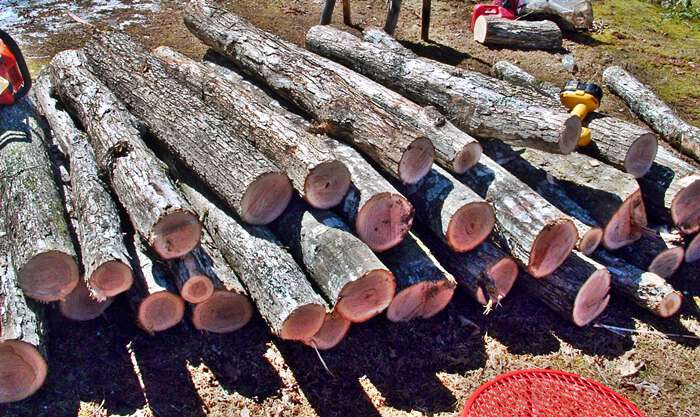 The logs should be cut in late winter or early spring actually anytime when the tree leaves turn brown in the Fall through the Winter and up to 2-3 weeks before the green leaf buds come out in the Spring-that’s when trees are in their dormant stage. What logs can you use? Christy said Oak are best but success has been achieved by using Sweetgum and hard Maple trees. After you cut the logs-you need to inoculate them pretty quickly-the quicker the better-within 3 weeks of cutting them in lengths. Some thought should be given to the size of the logs. At some point down the road you’ll be handling the logs as you soak them during the growing season. Large logs last longer, and of course grow more mushrooms-but are difficult for the typical home grower to handle. We took our cue from the class-and cut our logs 3 to 4 feet in length and 4 to 8 inches in diameter. You could cut them even smaller if you wanted to. 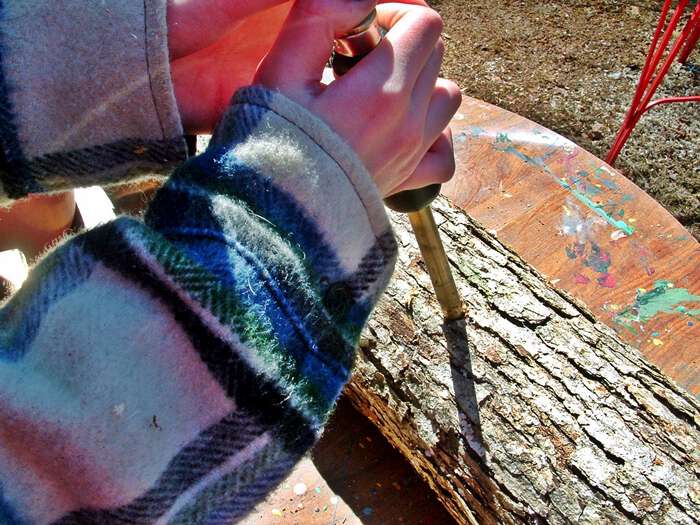 During the class we used sawdust Shiitake spawn to inoculate the log. Since then, I’ve discovered spawn also comes in plugs that you hammer into the logs. Wanting to use the knowledge I learned at the workshop we went with the sawdust spawn. Having an Inoculation Tool makes the sawdust spawn easy to insert in the holes. However, Christy said she had great success by just using her fingers to press the spawn into the holes. After you get the logs cut-the next step is drilling holes in them. Holes (7/16 inch bit) should be spaced 5 to 8 inches apart down the length of the log and 2 1/2 inches across. In other words you’ll have several long rolls of holes on each log. 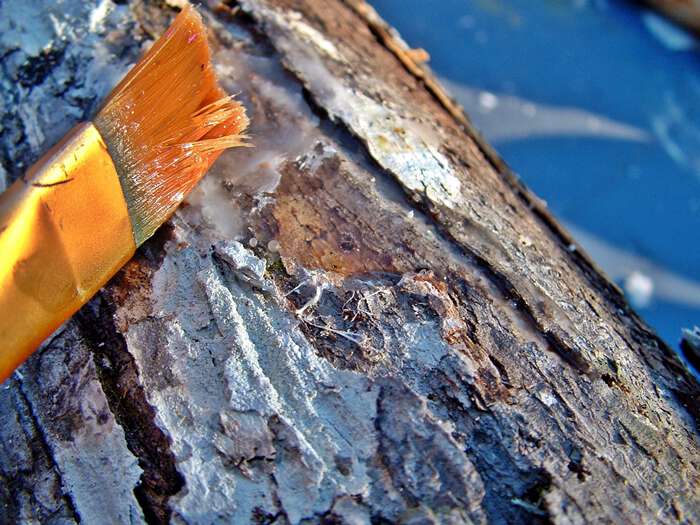 We put our spawn in a bucket to make it easier to work with. You kinda stab the inoculation tool into the spawn until it fills; place it over a hole; press the plunger; and voila you’ve just inoculated a log with mushroom spawn.

After you’ve inoculated all the holes, you must seal them with a layer of wax. Christy taught us-it doesn’t really matter what kind of wax you use-even candles would work-and of course bee’s wax would as well. At the class they melted their wax in an old crock pot. We had a fire going to warm by-so we just set a pan on the fire to melt ours. To apply the layer of wax you can use daubers or a paint brush. 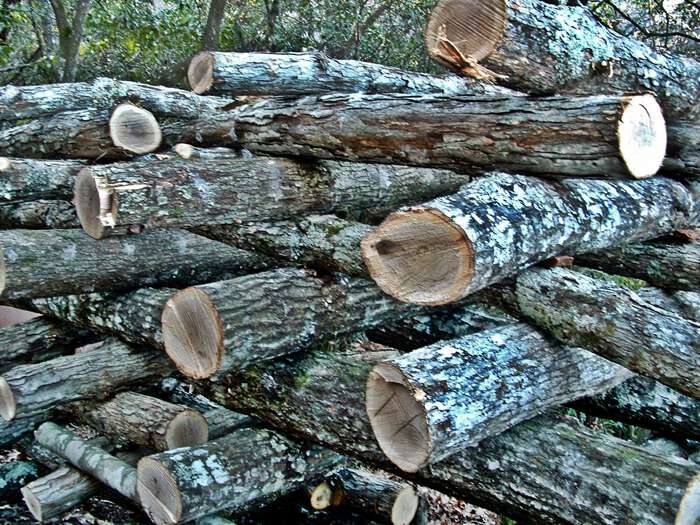 Once the logs are inoculated you have to decide what to do with them. They need to be kept in a shady place-but not under a shed-they need to be rained on. There are many ways of stacking-but the 2 they taught us about at the class were crib stacking and lean to stacking. Lean to stacking basically just means leaning the logs up against something like a wire or fence. Crib stacking-is like building lincoln logs. Christy said she preferred the crib method because once the mushrooms start growing they are easier to harvest-cause you can reach your hands in and around the logs-the downside being-you have to lift the logs more. We went with the crib stack method. When the logs are stacked thats it-you just leave the logs alone until it’s time for the mushrooms to start growing. Once I reach that point-I’ll show you the next step. One other thought-the logs will have to be soaked at a later date-so if you live near a water source-you might want to put your stack in a shady area close to the water. The logs need to be soaked during the spawn run, either with a sprinkler or by immersing in water for about 8 hours. This is important because the biggest cause of failure is the logs getting dehydrated. It is also important to let the bark get dry between soakings.

So now you’re wondering how long till I have some mushrooms? Well it’ll takes a while-at least 6 to 9 months-maybe longer. But once you get them established Shiitake mushrooms will continue to grow on the logs until they rot away-typically 3 to 4 years.

The good folks at MushroomPeople.com have been a huge help to my new Shiitake Mushroom growing venture. Jump over to their site and look around-they have anything you’d ever need when it comes to growing mushrooms-books, instructions, tools, spawn-you can even buy a small mushroom kit that comes ready to grow-and by checking around the web I’ve found you cannot beat their prices either.

Know anyone who grows mushrooms? Got questions about the process? 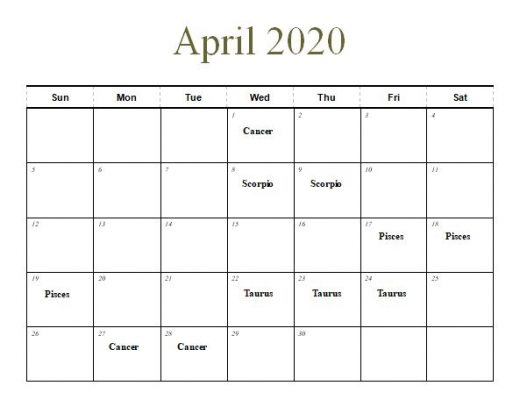 Planting by the Signs April 2020 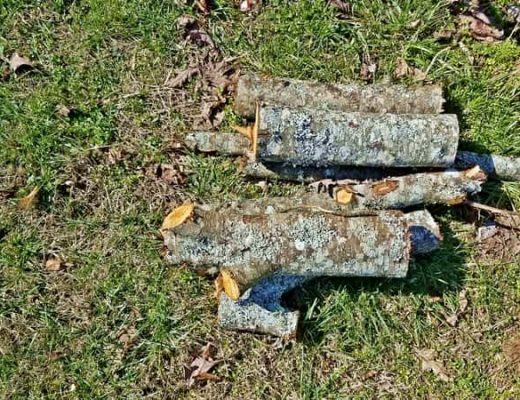 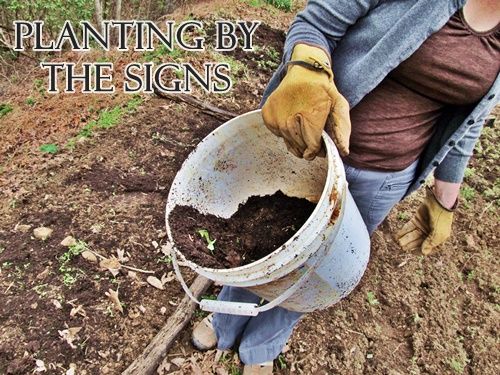 Planting by the Signs