Me and Rice’s Mill and Some Cats 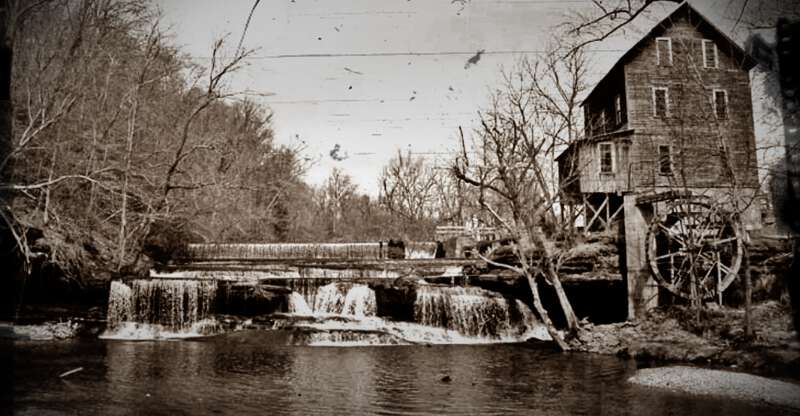 Me and Rice’s Mill and Some Cats by David Templeton

It’s with no small amount of chagrin that I see others claiming my story for their own. First, such claims, over the years, have tended to lessen my experience upon the ears of those who heard my story and at once had heard other claims, claims I assure you are lies. Mine was a singular nightmare, except for what had happened to those poor souls no longer in this world and can’t tell their tale. Secondly, the nightmarish thing that happened to me, recounted by someone else as their own could then be disregarded as folklore and merely an amusement. Amusing, I assure you, is not a word that fits what I saw.

Near the little village of Church Hill, in Hawkins County, Tennessee, stood a grist mill owned and operated by a Mr. Rice. Rice’s Mill had ground corn and made meal for the area for many years and had been passed down through the generations.

When I was fifteen Daddy had lost his job of work at Eastman to mechanization and couldn’t find good work because of he had a withered arm. We were left awful poor.

I determined that I would have to go off and try to find work, as it was summer and school was out and my younger brother could chop the wood and help keep the place up while I was gone. Before I set out, Daddy gave me his pocket knife, says “Now, David, you take this. Hit’s got regular blades and hit’s got a kinduva little fork and hit’s got this here silver blade that’s for skinning and cuttin’ up meat and cooking and all such stuff as that.” And, I lit out on down the road.

I went all up and down the road asking store owners and shops could they put me to work. Things had been okay during the war but then the defense plant idled down and not much money was coming into the area and nobody could hire me so I went on down the road.

And I went on and I went on and it commenced a getting dark and I finally came upon Rice’s Mill. As the mill stood a way down the road from where we lived, nearly down to Surgoinsville, I never had been to the mill and the only time Daddy went there was when he needed a turn of corn milled, which was only a few times a year. The last storeowner I talked to about a job of work told me that he had heard that Mr. Rice couldn’t seem to keep a helper very long and I might try down there.

When I got down there it was late in the day and I got out by Ol’ Man Rice’s house and hollered “Hellooooo…! and he came out with a lantern in his hand and said what did I want and I asked him was he Mr. Rice and he said he was and I told him my name and that I had come down from Church Hill as I had heard he might find a job of work in his mill for me.

He said he could shore use me if I wasn’t afraid to take the job because the last three fellers he had hired to run the mill for him had each been killed during their first night staying at the mill and it looked like each one might have been poisoned someway. Said if I could overcome all that hex and make a go at running the mill that he would make me half owner as he was too old to run it anymore and had no more family to leave it to.

I said could I see the place and look over the mill and he took me down to the mill and I looked it over and he showed me how to turn the water to the wheel and start the stones a’runnin’ and turn the corn into the millstones and the milling room was all fixed up with a place to sleep and there was a big fireplace and skillets and all and there were twelve small open windows spaced evenly around the room and about ten feet off the floor and with good air the dust from the mill would draw on out those windows and I said I think I might just take the job.

Well, Mr. Rice took me on back up to his house and he gave me some cornmeal and some bacon and other victuals and said he didn’t know where his ol’ lady had got off to but I could meet her tomorrow. And I went on back to the mill and started me a fire and commenced a’cookin’ me some bacon and frying me some fried cornbread.

Hit was a moonbright night and light was coming in those windows and I went on making me some supper and all at once seemed like things got kind of dim and I looked up and there was black cats settin’ single in each one of those little windows; twelve black cats, each glowing yellow eyes and flicking their tails, you know, like cats’ll do when they’re agitated.

And, I went on cooking and dreckly this one big old black cat jumped down out of her window perch and came over to where I was cooking and she sat there a minute or two and then she hesitatingly reached out and started to reach her right paw into my skillet, see could she grab my bacon and she said “Have it!” That’s what it sounded like … “Have it!. I was cooking with my pocket knife’s silver blade and I drew back with my knife and I said “You git!” and she recoiled and flicked her tail and them other eleven cats kinda wharrrred real loud and agitated about and purty soon here come the cat again and she reached out her right paw fast this time and yelled “Have it!!” and I knocked her away and I said “Yore gonna think “Have it!! You reach in my pan again and you won’t have a right paw. I’ll dang sure chop it off!!”

I went on cookin and just about forgot about her and here she come back and stuck her paw right in my skillet and yelled “Have it!!!” and in a flash, without even thinking, I come down on her paw with that silver blade and cut it clum off. She ran and jumped up and out her window and the other eleven cats jumped out and all were soon gone.

I forked her paw out of my skillet and wrapped it up in a rag and put it aside and took my skillet out to the millrun and washed it out over and over with sand and fresh water till I knew it was perfectly clean, washed my knife clean, went back in and made a new supper and ate that and went to bed and to sleep and got up early in the morning and got the mill a’runnin.

And, as I was a-stirrrin’ around I accidently knocked that rag off in the floor and instead of a cat’s paw falling out, out fell this hand … a right hand … a woman’s right hand … wrinkled… long fingernails … wearing a ring … bloody.

Without touching it, I took a stick and put the hand in a old flour sack, turned the flume water away from the wheel and switched the driving gear out, left the mill idlin’ and set out to Ol’ Man Rice’s house with the sack.

Got up there, showed Mr. Rice the hand and told him all had happened by my fire and how I chopped off that old black cat’s paw and about that chopped-off cat’s paw a-turnin’ into a old woman’s hand.

Mr. Rice took one look at the hand, said, “Well, I’ll bedad! This is just about what I been suspectin’. David, my old woman is still in bed, won’t get up. Says she’s feelin’ poorly. Wanted me to send for these eleven women from around the area, to come and be with her and I’ve got them all a’comin’ here. You come on in the bedroom with me, I think we can get to the bottom of all this.” Went in, said, “Old Woman, this here’s David and he’s going to be runnin’ the mill.”

About then all them other eleven women came in and gathered around her bed and she stayed all under the covers. They all acted real concerned and nervous. Mr. Rice said, “Old Woman, stick out your right hand, I want to see it.” She scrouged all around, stuck out a hand but it was her left hand. He said, “I told you to stick out your right hand!” She wiggled all around under the cover, shifting around, then stuck out the left hand again. Mr. Rice shouted, “I told you yore RIGHT HAND!! and with that, he grabbed the covers off her, grabbed up her right arm and hit was all bloody at the wrist and her right hand had been cut off.

Before any of them could move, Mr. Rice grabbed
me, pulled me out the door, locked the door tight on his ol’ lady and them eleven others, and threw coal oil on the house and set it on fire with those twelve hags inside and you never heard such meowing and screeching and clawing. Burnt them all up.

Said, “David, when I saw that hand with that ring on it and knowing what me and the village has been suspecting, I realized my wife had been headin’ up a big coven of witches. If you hadn’t had that silver blade to chop off that paw, she would have just growed that paw back on. It takes silver blades or silver bullets to stop a witch.”

On hearing the story from Mr. Rice, folks around there were real pleased that those witches had been destroyed. Things got a lot better and the mill got real busy and my little brother would come to see me and I would send money back home and my portions of cornmeal from when people couldn’t pay except to barter. Mr. Rice built him a new house. Lived on till one day he went to his final reward. Left me everything.

Many years later, I sold it all; did okay.

The old mill is still there, back in the weeds and overgrowth and all fallen down. A historical marker stands out on US 11W. It doesn’t mention the history of witches down there.

I hope you enjoyed David’s spooky story as much as I did! If you’d like to read a good mystery about an old grist mill go here for the details. 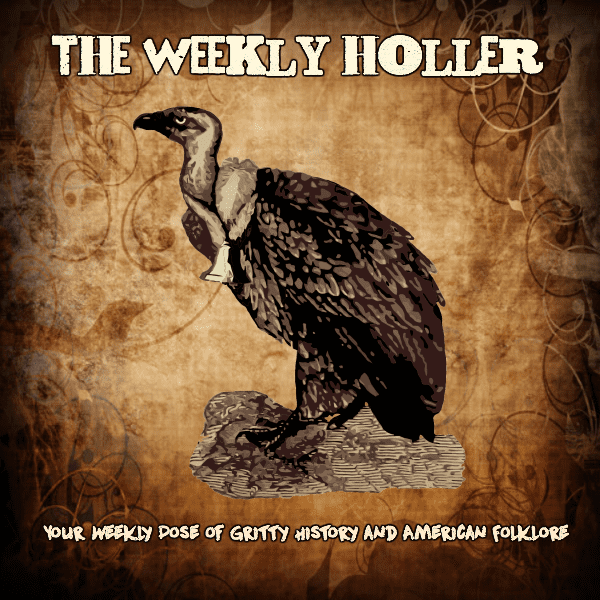 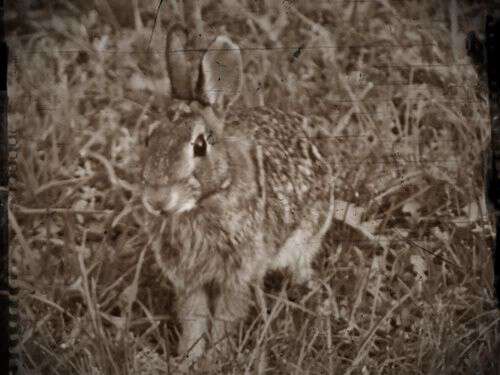 Has a Rabbit Ever Run Over Your Grave?